In Search of Coherence is a fake documentary relating the making of a fictive exhibition entitled “A fly on the wall” at SIC! Raum für Kunst in Luzern.
It follows a classic TV-format, i.e chronological telling of the exhibition making process from conception to opening night, interspersed with interviews and comments from the protagonists and also expert “talking heads”.

Part 1 at SIC! ElephantHouse was a living room set-up in the middle of the classic white-cube frame of the space. All the furniture was arranged around a tv-set on which the In Search of Coherence fake documentary was playing.
Part 2 at Museum Bellpark, Krienz, consisted in all the material from the fictive exhibition “A Fly on the Wall” as portrayed in the documentary “In search of Coherence”, albeit all crated and wrapped-up.
Since no artwork is being depicted or precisely named in the video, it was up to the viewer to imagine what the content of these boxes and transport-frames was.
The press release for “A fly on the wall” was also shown, framed and on the wall. This press release is a classic and fiendish example of a barely readable –and unbelievably pretentious– verbose the visitor accustomed to contemporary art exhibition will be familiar with, (indeed it was assembled from collected existing press releases). 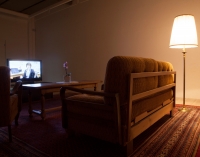 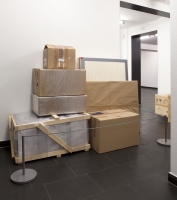 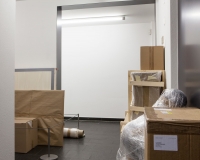 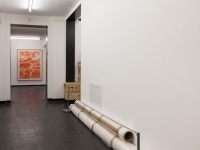